Jerry Springer: Go Get Your Own Boyfriend!

On March 13 2013, Jerry Springer is getting some help breaking up a girl fight. Two girls are fighting over one man. It seems like neither girl can entertain the guy the way that he wants. They blame each other for his cheating. 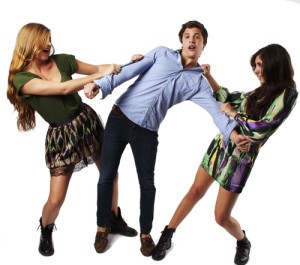 “Maybe if this home wasn’t so boring I wouldn’t have to wreck it!” one of the girls shouts.

The kicker is that this man has a third woman on the side. She’s an exotic dancer and Jerry has just the facilities for her to show off her skills. This dancer is a cousin of one of the girls. The blows just keep on coming with this love square.

Mercedes and Aisha are not heading to the chapel. Mercedes may want to marry her girlfriend, but Aisha has already found a new paramour.

After getting down on one knee, Aisha tells Mercedes that she can’t marry her. This new lover is younger, smaller and a model. The model and Aisha say they want to be together, but Mercedes isn’t going without a fight. They taunt each other and the claws come out on today’s Jerry Springer.

Also in this episode, two brothers fight over the same woman. What’s so special about this woman that she has these bros throwing punches? Tune in to Jerry Springer on March 13 2013.