On March 15 2013, Jerry Springer is helping friends battling over the same man who is also cheating on them. Then, a woman finds out her husband has been sleeping with a woman from a nearby trailer park. The trailer park lady’s husband is not happy about it either. 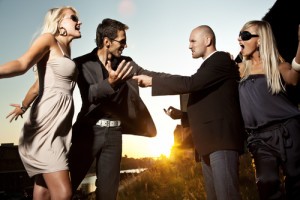 On March 15 2013, Jerry proves just how complicated love is with a dizzying love square between two gay men and two drag queens.

Two friends are competing for the same man. This guy wants nothing to do with them though. The first contestant for his love is a drag queen that just wants some love. Her best friend is gay and has the same crush. They fight it out on stage and tell each other that neither is good enough. That’s a great best friend.

Jerry brings out another drag queen that the guy does want to date. The best friends reunite to pick her apart, but she’s won the ultimate prize and nothing gets her down. The couple kiss onstage, but they’re broken apart by the two best friends. If they can’t have him, no one can.

While their marriage isn’t in the best place right now, Marie isn’t happy with the new direction it’s taken. Her husband confesses that he’s been sleeping with Lindsey, a woman from a nearby trailer park. Lindsey thinks that Marie’s marriage is a complete joke and shows no remorse.

While this would be an interesting story on its own, Jerry brings out Lindsey’s husband. He’s not amused with the situation and I wouldn’t be surprised if fists started to fly.