On April 5 2013, Jerry Springer brings you a little something to relax on your Friday. Today’s episode should make you feel grateful that this isn’t your life. If it is your life, you now know who can help you sort through your issues. It’s a win-win. 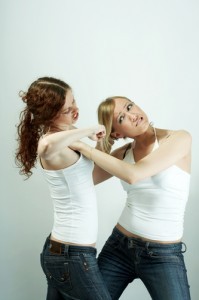 On April 5 2013, Jerry has two women fighting over each other and men.

Two women find out that they are cheating on each other. However, they’re cheating with men. I think everyone is confused with this girl fight.

I’m a little confused by this first story. Two lesbians find out that they’ve been cheating on each other. The confusing part is that they are seeing men on the side. So are they gay? The women yell and scream at each other, giving a less than impressive fight.

I’m 90 percent sure one of the girlfriends is not gay. She’s pretty proud of snagging a man, but then she also loves to brag about her escapades with her girlfriend. See if you can figure out what’s going on on April 5.

This episode just gets more and more confusing. How do you have intimate relations with a person with your clothes on? Apparently, Jerry’s next guests did the nasty while completely clothed. To make it a little more explainable, normal or something that you would see on Jerry Springer, this is a cheating scandal.

My brain isn’t capable of doing this much thinking on a Friday. Jerry, I like when your episodes are out there. But I can’t figure out this episode to save my life.