Home > Good Morning America > GMA Recipes
When you buy through our links, we may earn an affiliate commission. As an Amazon Associate we earn from qualifying purchases. Learn more. 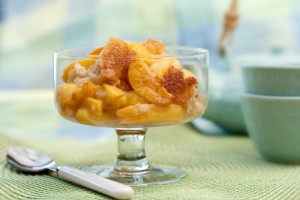 When you think Colonel Sanders, you probably think delicious fried chicken. However, the famous Colonel and creator of KFC had a lot of lesser-known recipes that had been widely undiscovered, until now. Edward Lee is the chef at 610 Magnolia Avenue in Louisville, Kentucky, and is a paid spokesperson for KFC. Chef Lee has modernized some of the Colonel’s traditional recipes, from meatloaf to fried red tomatoes. Chef Lee stopped by GMA September 6 to share another dish, the Colonel’s Upside-Down Peach Cobbler Recipe.

To serve along with your hot and delicious peach cobbler, Chef Lee recommends a very simple buttermilk whipped cream; it sounds fancy, but it’s a piece of cake. Just mix one part buttermilk with two parts heavy cream, whipping just as you would normal whipped cream. Place a dollop on your cobblers to make them even more delicious.

More of the Colonel’s recipes are featured in a new free cookbook, and to find out how to get your hands on a copy, visit KFC’s Facebook page.