Home > Good Morning America > GMA Product Reviews
When you buy through our links, we may earn an affiliate commission. As an Amazon Associate we earn from qualifying purchases. Learn more.

GMA: Personal Trainer On Your Wrist

Rachel Smith did a special report on the “Up” by Jawbone, a bracelet and app which allows the user to keep track of their steps, calories, sleep habits and health in order to become more healthy overall. The user has to imput the calories, mood and the sleep habits, but much of the other stuff is automated, and within a week, the user can have a really accurate picture of their diet and health. No word yet on whether this is how Skynet begins.

Rachel Smith’s report consisted her of showing us how it worked and taking the device into her home. The device was able to show her how much sodium she’d consumed that week, because it knew exactly what she’d eaten. She was able to realize that was a concern for her. The device is $129 and she said she thought it was totally worth it. 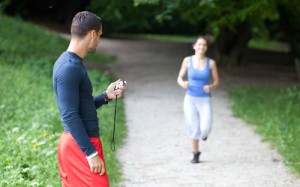 The human connection of a real life personal trainer is cool and all, but lots of people are starting to prefer taking their health into their own hands with the “Up” bracelet and app by Jawbone.

What do you think? Would you use the “Up” bracelet and app by Jawbone?

The grumpy cat is a viral sensation. It’s hard to imagine someone not being familiar with the cat. We’ve all seen the photos of her, looking grumpy, with a caption like, “They said I couldn’t care less,” and then, under the photo, “Actually I could care less.” It all started when her owners posted videos on the internet of the cat after people on the internet swore her face was photoshopped in photos. Her videos have been viewed millions of time. The grumpy cat is even the new face of Friskies.

The grumpy cat’s owners Tabitha and Brian were on GMA. Tabitha said that the grumpy cat’s personality is really sweet in real life. Brian said it started when they posted one picture on reddit and it took off from there. Brian said that he’ll post a picture of the grumpy cat on Facebook and within minutes, it has thousands of likes. He said it was a really intense phenomenon. Lara Spencer commented that even though the grumpy cat looks really grumpy, they could all hear her purring. Brian said she always looks grumpy.