Pantene, Dove, Verizon, and GoldieBlox have all used feminist advertising in recent campaigns, and now Always is joining the club with the new Like a Girl video, Good Morning America said. The video is gaining a lot of attention on the internet, and currently has over 13 million views. The Like a Girl video leaves many wondering where this attitude is coming from, and why it’s ok to use the phrase “like a girl.”

GMA: What It Means To Be Like a Girl 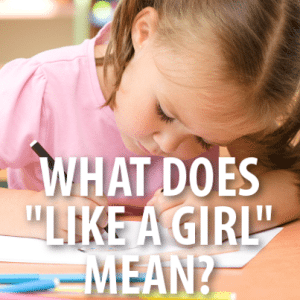 What does it mean to do anything Like a Girl? A new ad campaign from Always is asking that question. (Serhiy Kobyakov / Shutterstock)

In the Like a Girl ad, people are asked to do different things “like a girl,” including running, fighting, and throwing. One young boy is asked if he thinks he just insulted his sister, and he says no, but that he probably just insulted girls in general.

Emma Bazilian, a staff writer for Adweek, said that while the video is shocking to see, it’s probably what anyone over the age of 10 would be thinking if asked the same question.

The ad flips the notion of what “like a girl” means when they put young girls in front of the camera and start asking them questions. First, they ask what it means to run like a girl, and the young girls quickly run in place, seemingly using all their energy.

The ad claims that most girls’ self confidence plummets when they reach puberty, and according to their study, only 19% of girls have a positive association to the phrase “like a girl.”

Pop culture and parenting expert Ericka Souter was on Good Morning America to talk about the new advertisement. She thinks this advertisement can absolutely change the way we use the phrase “like a girl.”

Lara Spencer asked what changes the perception young girls have when they hit puberty, and Ericka Souter said it has a lot to do with girls feeling self conscious, worrying about boys, and looking for acceptance. Michael Strahan asked what he can do to make sure his two nine-year-old daughters continue to know they’re strong, capable women. Ericka Souter said it starts with parents encouraging their daughters, but also asking grandparents, aunts, uncles, and teachers to come alongside and encourage in the same way.