Good Morning America had coverage of the Boston Marathon bombings April 16 2013, live from Times Square and Boston. Yesterday, two bombs went off at the Boston Marathon, 12 seconds and between 100 and 150 yards apart. The bombings were planned to go off at the moment the most runners were crossing the finish line. At least 140 people were injured and three are dead. No one has claimed responsibility for the bombings.

Josh Elliott and George Stephanopoulos were in Boston, standing at the side of the road to report on the tragedy, just three blocks from where the bombs went off. Josh said that yesterday was Patriot’s Day, a local holiday that remembers Boston’s role in the American Revolution. George Stephanopoulos said it would always be remembered in a different way now. 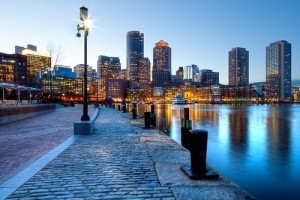 Twin bombings at the Boston Marathon April 15 2013 shocked the nation. GMA was on the scene April 16 2013 to cover the tragedy.

GMA: Events At the Boston Bombings

The first bomb went off just before 2:50 p.m., on the sidewalk of the marathon, spewing white smoke and shrapnel into the air. The crowd, still reacting from that explosion, was shocked by the second explosion. In the video, it’s the second explosion, not the first, that causes everyone to run. The event was captured from multiple angles on video camera, camera phones and professional recording equipment.

There were 400 National Guardsmen already on the scene for the race. They joined with Boston police and emergency personnel to create an impromptu triage center for the injured at the medical tent.

Around 3 p.m., as President Barack Obama was being briefed on the attack, a bomb went off at the Boston Public Library. This explosion was later ruled unrelated. Obama later made a speech, around 6 p.m., where he said, “Make no mistake. We will get to the bottom of this.”

GMA: Who Is Behind Boston Bombings?

The videos seem to be providing the most important clues. The white smoke from the bombs indicates a small velocity explosion, indicating that they were not professional devices and were very small. The large pieces of metal shown in the air in the video show that the bombs may have been concealed in a mailbox or trash barrel.

According to security Nick Casale, “There’s nothing worse than knowing that you have a depraved, indifferent killer out there. Forget his motivation, whether it was political or social or just a psychopathic criminal. He has to be caught, and he has to be caught immediately.”

An eight-year-old, Martin Richard, was among those who died at the bombings yesterday. His father apparently ran the race and shortly after giving his father a hug, he joined his mother and his sister at the sidelines when the explosion went off. His mother is seriously injured and his sister lost a leg. Linsey Davis said, “It just makes you want to hold your loved ones a little bit closer.”

A marathon runner who finished the race before the explosion, who was also a trauma surgeon, immediately helped out last night and he was on the phone with George Stephanopoulos this morning to talk about the scene. He said that the emergency personnel rallied very quickly and were able to get to the critical patients in time, largely saving the at-risk patients. More than 25 victims lost limbs. Dr. Dave King said that a lot of these injuries were similar to those he saw as a combat surgeon in Iraq and Afghanistan, which are limb, abdominal and lower extremity injuries.

George Stephanopoulos said that they heard ball bearings around the bombs. He wondered if Dr. King had seen anything like that. Dr. King said he couldn’t comment directly on what foreign bodies were recovered, but he did say there were multiple fragments packed in around the bombs.