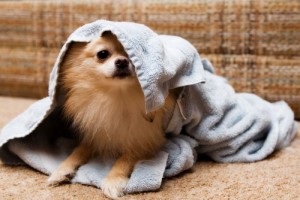 Boo, a Pomeranian, is a hit on Facebook and bestselling star of books including "Little Dog in the Big City."

Becky Worley traveled to San Francisco, California, to hang out with the cutest, cuddliest dog in the world, Boo. The 9-pound, 6 year old Pomeranian is an Internet celebrity who has mastered the art of being cute.

One woman in San Francisco was so surprised by Boo’s fluffy face she thought Worley was carrying around a panda. Only the cutest of dogs could be confused with a panda bear.

Boo, who has over 5 million fans on Facebook, has started quite the conglomerate for himself with a line of toys modeled after himself, his own “puparazzi” and even two different books. His newest book, Boo: Little Dog in the Big City, Boo traveled around San Francisco checking out the sites, getting his picture taken and signing “pawtagraphs” for his adoring fans.

They brought a 1964 Trident to the streets on Times Square. The tiny car, which resembles a Marty the Martian Spacecraft, has nearly a nearly 200 cc engine under the hood, which Ferrara said “didn’t make it to safe to drive.”

Good Morning America host Josh Elliott tried to squeeze into the rear entrance of the car, which he managed, only to beg to be let out, saying he didn’t want to have a claustrophobia attack on air. Although the car is drivable, the brakes on the car didn’t look like they could stop a matchbox car.