Jerry Seinfeld is on Good Morning America today to brighten up your day with some funny jokes and snarky commentary. He said he was thrilled to be on GMA and even more “glad to be an America.” With the countdown to Christmas happening on GMA, they knew they had to show the clip of when Jerry and Elaine learn about Festivus on Seinfeld. 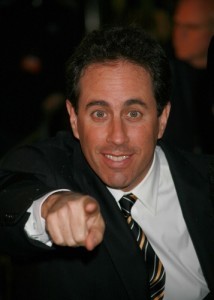 If you don’t know anything about Festivus, Jerry Seinfeld explained it was the version of Christmas George Costanza would celebrate on Seinfeld. “Festivus is like taking away all the pretentiouness of Christmas. You just have the pole and arguing,” Seinfeld said.

Good Morning America also wanted to know what his favorite Christmas movie is and Seinfeld said it was between A Charlie Brown Christmas and A Christmas Story.

Prince William went to the premiere of The Hobbit without his wife Kate Middleton who is at home resting from her stay in the hospital earlier this week.

Jerry Senifeld though it was pretty strange Prince William would wear a tuxedo to the premiere but it seemed like everyone at the premiere was wearing one.

Anyways, Prince William told the theater manager that Kate Middleton would have loved to have come to see the movie. He also chatted with Ian McKellen, who plays Gandalf in the movie, and he wished Kate Middleton his best in recovering from her hospital stay.

A new viral video on the internet is spoofing the classic Stanley Steemer jingle. Mia Gentile can be seen in the video singing the jingle in a number of different styles from Latin to Lady Gaga.

Gentile stopped by the Good Morning America set and said she wanted to do the video because the jingle is always stuck in her head. She said it has been in her subconscious since she was a little kid.