Gil and Kelly Bates and their wholesome Christian family are a family like any other – except they have 19 mouths to feed, 19 sets of clothes to watch and who knows how many diapers.

The Bates, who live in Knoxville, Tenn., have 19 children ranging in age from 6 months to 23 years old. Kelly homeschools her children and Gil runs a tree cutting business. 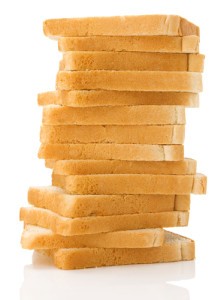 The 21-member Bates Family from TLC's United Bates of America said they go through eight to nine bread loaves per week.

There are no video games, no internet and no TV in the Bates household. Starting August 13, America will get to see their everyday life on their TLC show called United Bates of America.

Kelly and Gil packed up their brood and headed to New York City to appear on Good Morning America. Kelly said the subway was nerve-wracking because she heard the doors close quickly, and the prices at New York restaurants gave them sticker shock. The Bates family was also stunned to see scantily clad New York City sunbathers.

The Bates family originally shied away from doing a reality show, but after appearing on the Duggar family’s show, 19 Kids and Counting, they had a change of heart. Gil says they received many positive email responses and thought they could be an encouragement to other families.

How To Afford 19 Kids

Kelly and Gil never expected to have 19 children. Kelly says they just wanted two or three kids when they got married, and she was focused on her career in human services. All that changed when she says God started showing them how wonderful kids are.

The Bates family is debt free – no mortgage, no car loans and no medical insurance. They pay for everything with cash and try to live within their means.

Will The Bates Family Have More Kids?

Kelly has miscarried several times and is now 45 years old. She says she hopes for more children and will welcome them into the family but is content with whatever the Lord will give them.

Having 19 children isn’t always easy – Kelly says she’s tongue-tied all the time and that sometimes it takes her four or five names before she gets the right one.

Getting to Know the Bates Kids

Oldest son Zach Bates is living at home and going to college but knows eventually it will be time for him to move out and start his own family. Son Lawson is the family grocery shopper. Lawson says he has to go every other day, and that the Bates family easily goes through eight or nine loaves of bread each week.

The Bates divide and rotate chores every month. When it comes to laundry, folding and sorting socks is pretty much impossible.

The kids say it’s pretty normal to have the cameras following them around now. Tori Bates says in order to get time alone, you have to take a walk in the woods. She also says that cleaning the bathroom is difficult.

Erin Bates says she loves her big family and that there is always someone to share what you’re going through with.

What Do the Bates Children Think?

Only one of the Bates’ had heard of Justin Bieber, and no one was familiar with Kim Kardashian. One Bates kid knew what Star Wars was. The kids love football, and root for New York Jets Quarterback Tim Tebow.

The mother of 19 says they have their moments, and that it’s a training process for the family, but what holds them together is a foundation of faith. The family then went on to sing a religious song.

You can catch United Bates of America on TLC Monday, August 13 2012.