The sun will come out tomorrow, but it’s always been a hard knock life for Miss Hannigan. Sandra Bullock, star of the new cop comedy The Heat, is in early talks to play the evil orphanage caretaker in Will and Jada Smith’s Annie. The role was originated on screen by Carol Burnett and is currently being played by Jane Lynch on Broadway. Bullock would be an excellent choice and bring that something special to the role. Annie will also star Jamie Foxx and is due in theaters December 2014. 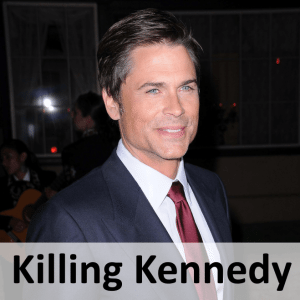 We have a first look of Rob Lowe in Killing Kennedy. Sandra Bullock is in talks to play Miss Hannigan. Researchers are working on a love potion nasal spray. (s_bukley / Shutterstock.com)

Ladies and gentleman, the President of the United States. As far as roles go, Rob Lowe is an acting chameleon. He did a huge transformation for his role as Dr Jack Startz in Behind the Candelabra, but NatGeo has released the first look of Lowe in character for Killing Kennedy.  The pic shows the actor in head bowed stance of an iconic JFK portrait. The look is dead on and it’s amazing he’s never been compared to Kennedy before! Also on the cast, and a dead ringer for her character, Ginnifer Goodwin (Once Upon a Time) playing Jackie Kennedy.

The film is being released this fall to coincide with the 50th anniversary of JFK’s death.

The newest wedding trend is not fascinating center pieces or unique gift bags. No, the newest wedding trend is getting attacked at your wedding. One couple put in a TRex eating their wedding party, but the latest one is for the geek in all of us. The bride and groom, along with their slow wedding party, run away from a fleet of Star Wars Imperial Walkers. The couple even did a spoof of their dating in movie form.

Good Morning America: Love Potion Nasal Spray Coming to a Pharmacy Near You?

Researchers are asking a very heavy question: if there was a love potion would you take it? Now ask yourself, if it was in nasal spray form, would that appeal to you? Scientists believe that a shot of oxytocin in the nose, which will put it directly in the brain, could keep couples loving each other longer.

Dr Jennifer Ashton said whoa, nelly! Hold your horses, people. It’s an area of ongoing research and research shows that oxytocin is released when couples cuddle. Most people say no to the miracle nose spray, but the few takers think that if it were proven to work they might buy it. Many believe that love doesn’t come in a bottle.