GMA reported February 20 2013 that the lead investigator against Olympic star Oscar Pistorius has come under investigation himself for attempted murder, stemming from a 2011 charge. This is a huge blow against the prosecution and it’s looking more likely that Oscar Pistorius will get bail. 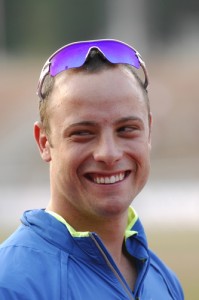 The lead investigator for the Oscar Pistorius trial was charged in 2011 for attempted murder. (miqu77 / Shutterstock.com)

In Damascus, Syria, a car bomb went off killing 31 people, many of them children. The blast’s damage extended 10 stories high. Rebels hoping to overthrow Basher Al-Assad have said for a long time they would bring their battle to the streets.

GMA reported February 20 2013 that a study of older Americans found that drinking three cups of coffee a day can lower the risk of heart disease and stroke by up to 50 percent. Josh Elliott noted that the GMA anchors would all be living to 106.

But there’s bad news for Josh Elliott. CNN reported this morning that a study published in Neurology, an online journal, found that the antioxidants in coffee and tea may not be enough to reduce the risk of dementia or stroke. So while heart disease risk may be reduced, stroke and dementia are still up in the air.

In my humble opinion, it seems like if two different studies released within a few days of each other show such wildly different answers, it’s probably not possible to conclusively declare one way or the other the benefits, or lack of benefits, of coffee. But I’m hoping I’m wrong, because coffee is wonderful. I’d prefer the glass half-full possible health benefits over the alternative.

Prince Harry took a new flame to the slopes, 24-year-old model Cressida Bonas. Is he in love?  “He likes the blondes,” Sam Champion said. Lara Spencer agreed he does seem to be consistent.

Lindsay Lohan borrowed a $1750 dress for an amFAR event from a designer, but at some point in the evening, she decided it should be a mini dress. She returned the dress in very poor condition and the designer is mad.