Earlier in the broadcast on Good Morning America Valentine’s Day 2013, a man named Brian proposed to his girlfriend Melissa. She said yes. But there was a catch. They had to get married in the next 20 minutes. Good Morning America already had the bride and groom’s friends and family waiting nearby and Lara Spencer helped Melissa choose a dress. Now, what about the most important part, the cake?

Sam Champion went over wedding cakes with the man who made his wedding cake, Buddy Valastro. Buddy Valastro raided Melissa’s Pinterest page looking for cake ideas that Melissa herself had suggested for her dream wedding. 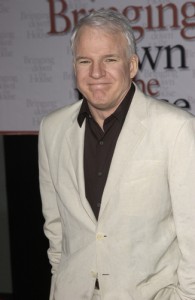 Steve Martin announced he is a first-time dad. Steve Martin is 67, and joins a growing number of older Hollywood fathers. (Featureflash / Shutterstock.com)

The first cake had a fabric-style frosting pattern on it, with a tiny scuba diver on it, a reference to the couple’s first date. Then, there was a cupcake tower cake that Buddy Valastro called “fun” and “a little va-va-voom for Valentine’s Day.” This one had a cheetah print and pink color scheme to it that frankly, I thought was tacky. But it wasn’t my wedding, so who am I to judge?

The last cake was an elegant cake with rhinestones and pink flowers decorating them. Sam Champion and Buddy Valastro agreed that the first one was their favorites.

It definitely seems to be. Steve Martin’s happy news was probably the most shocking, because the age of 67 means Steve Martin will be 85 when the child graduates from high school.

Seth Meyers, relationship expert, said that having a child later in life can give you a tremendous sense of purpose.

The ring that Brian proposed with had a carat and a half worth of diamonds set in 14-karat white gold.

Also, Good Morning America organized the reception. They arranged an 18 person dinner with filet, prime rib and oysters on the half shell. Sam Champion said that if Melissa hadn’t said yes, there would have been an awful lot of food left over.