Sherri Shepherd joined the hosts on Good Morning America April 2 2013 to talk about Dancing with the Stars. Robin Roberts was out today and Sherri Shepherd declared, “I’m not Robin, but I’m having fun,” while dancing. It was a spirited start. 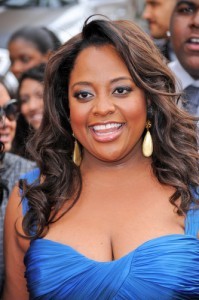 Sherri Shepherd was on GMA April 2 to talk about Andy Dick and Dancing with the Stars. (s_bukley / Shutterstock.com)

Because it was Prom Night on Dancing with the Stars this week, Amy Robach brought in her prom night photo. She actually looked pretty good, considering that when it was taken, in 1989, there were a lot of ways to look embarrassing. Amy Robach pointed out that everyone was supposed to bring a prom photo, but nobody did. Josh Elliott handed out corsages for all the ladies.

“My uterus is broken, so I can’t get pregnant, Josh,” Sherrie Shepherd said. Everyone ignored this statement, so she said it again.

Sherrie Shepherd said uterus a few more times during the broadcast, and Lara Spencer joked it was going to be like Sesame Street and the word should appear at the bottom of the screen as the word of the day.

North Korea has vowed to restart their nuclear reactor, which can produce enough plutonium for one bomb per year. The reactor was shut down in 2007 as part of an international arms deal.

There’s a new scam out there for New Yorkers. Phony Good Samaritans go up to drivers and tell them they have a flat tire. When the people pull over to inspect their tires, the crooks rob them.

President Barack Obama announced a new government brain study, costing around $100 million. He’s hoping the new government initiative will help in the development of drugs and better ways to help us understand Alzheimer’s.

In New Jersey, children under 17 are now banned from using tanning beds. The law was made in part in response to a woman known as the “Tanning Mom,” who was accused of taking her five-year-old into a tanning booth with her.

GMA: The Motorcycling Easter Bunny Says It Was a Misunderstanding

The Easter bunny who was pulled over in California that GMA talked about yesterday insists that he was wearing a helmet. Police gave him a stern warning. The man, who calls himself “E.B.,” said that people can feel free to use his image to raise awareness. Josh Elliott said he wasn’t sure what they were supposed to be raising awareness for. Sherrie Shepherd said that she wanted her husband to dress as an Easter bunny. When everyone laughed and half-groaned, she joked that they probably didn’t want her on the show anymore.

The original manuscript for Breakfast At Tiffany’s is up for sale. The starting bid is $10,000. The manuscript is full of notes from author Truman Capote.

The boy band Hanson is getting ready to release a new album. The kids are all grown up now and critics say they sound like mature men. This comes on the heels of New Kids on the Block’s new album, which critics say is good. Hanson will go on tour with 98 Degrees and Boys 2 Men, a tour called the “Package” tour.

“I want to see the package!” Sherri Shepherd said.

“And you can,” Lara Spencer said.