George Stephanopoulos was out this week on Good Morning America, so Paula Faris was reading the news and Josh Elliott was sitting in George’s spot. GMA reported March 19 2013 that an estimated 300,000 piled into St. Peter’s Square to watch the inauguration of Pope Francis. The new pope rode in on a topless SUV, stopping to kiss babies and waving to the crowd. The pope urged people to respect the poorest and the weakest among us. 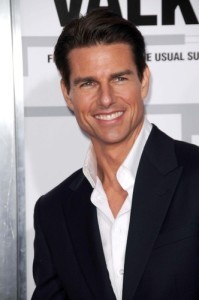 GMA reported March 19 2013 that Tom Cruise is the frontrunner for the new movie The Man From U.N.C.L.E. (s_bukley / Shutterstock.com)

At least a dozen car bombs went off in Baghdad killing 59 people and wounding hundreds. Today is the 10 year anniversary of the war in Iraq. The car bombs are the latest evidence of the religious tensions that may throw the country into chaos.

GMA: Alzheimer’s On the Rise

A new study shows that one in three people over the age of 65 die from Alzheimer’s or some other form of dementia. That’s an increase of 70 percent over the last decade. Dementia is often not the cause of the death, but the disease can contribute to an older person’s health decline.

George Clooney has long been rumored to be playing the lead role in The Man From U.N.C.L.E., but now he’s reportedly not going to do the role due to a back injury. Tom Cruise is the new frontrunner for the role.

GMA: Richest Musicians Of All Time

In the list of the top 20 richest musicians of all time, Jay-Z, Beyonce, P. Diddy and Elton John are all there. But one big surprise is Bing Crosby, who is worth $550 million. Another big surprise is Andrew Lloyd Webber, who has a net worth of $1.2 billion.

French Emperor Napoleon Bonaparte’s engagement ring for his wife Empress Josephine will be up for auction in Paris later this month. It’s a diamond and sapphire ring and the presale estimate of its value is $13,000 to $20,000, but it will likely be going for much higher than that. Napoleon gave the ring to his then-fiance Josephine in 1796 and it’s been a part of the collection of the descendents of the Emperor since then.