As the clips for Dancing with the Stars scrolled off the screen, Bowen said she could not do any of those moves. And I believe her after seeing her try and dance.

Anyway, Bowen also introduced a clip from the next season of Modern Family, which airs tonight, where she gives her daughter on the show, Haley, a “hangover cure.” The drink automatically makes the underage drinking Haley run to the bathroom. The ingredients? Anything Claire Dunphy could find in the kitchen. 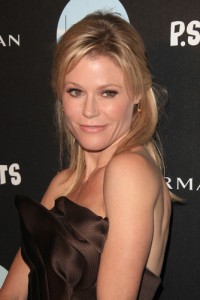 Bowen also talked about her three sons on the show, saying the oldest has severe food allergies and recently has an anaphylactic allergic reaction to nuts he had eaten. Bowen said her sons face ballooned up like the elephant man and she rushed him to the hospital. She said, even though he is allergic to bees as well, he still runs away doing what other children do. She just has to keep a epinephrine shot handy.

Dancing with the Stars eliminated the first couple the other night. The first couple to go, just like Wendy Williams predicted yesterday, were Pamela Anderson and her partner Tristan MacManus. The judges has told them the first night they needed to work extra hard to get the moves down, but the extra work just didn’t pay off.

MacManus told Good Morning America the odds were a bit stacked against them, since Anderson was one of only two people who had never been to finals on the show. But he said he enjoyed it and also got a little perk from the show. MacManus said many people used to make fun of him for dancing, but now he thinks he got the last laugh after he got to dance with the one and only Pamela Anderson.

MacManus said he now cheering for Kelly Monaco. Maybe next year will be your year Tristan. I mean, if you keep taking your shirt off, I’m sure women will keep voting for you.

Speedman almost didn’t sign up for the show either. He said he was hesitant at first, but after seeing Andre Braugher has signed on, he put his name on the 7 year contract for the show. And many people are curious to see how it can last that long. Good Morning America said many reviewers loved the show but had no idea where it could go after the first episode.

Are you going to be watching the show? Where do you think the show is going to head in its first season? Let me know in the comment box below.