Ricky Gervais has just come out with a new app, called Just Sayin’, that allows users to leave short recorded audio messages for their followers to listen to. Gervais announced he was going to make the app a while back when he said he was going t be leaving Twitter because of all the “idiots.” As for the app itself, it does not seem to be getting very many rave reviews. Most of the reviews call the app buggy and glitchy. 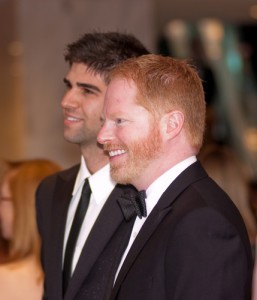 The foundation sells bow ties to help raise money for marriage equality. And the actor has even more good news to look forward to. He has been nominated for an Emmy for best supporting actor in a comedy series.

The Fifty Shades of Grey fad seemed to be dying down but people love to beat a dead horse. F. L. Fowler, the author of Fifty Shades of Chicken, said he got the idea for a book as he was tying off a chicken. The book, a recipe book actually, has a range of very risque chicken recipes with names like ‘Dripping Thigh’ and ‘Mustard Spanked Chicken.’

The names sound kind of strange but how can you make chicken taste bad? I am all for this cookbook.

A cat in Bedfordshire has been stealing anything he can get his paws on for the last 18 months. Dennis the Cat is a real life cat burgular. The mischievous cat has stolen everything from boxers to children’s toys to a pair of someone’s slippers. Dennis’ owner said he has to large boxes for all the missing goods and lets the neighbors know to stop by if anything goes missing.