The GMA crew shared a viral video that not only got some laughs, but also had some people wishing they could participate. The video shows an office desk chair race, where people strapped on costumes and crazy outfits and rode desk chairs down a road lines with haystacks. You could see some people go flying by the camera on their chairs, whereas others were scooting along, and some were tumbling off their chairs. 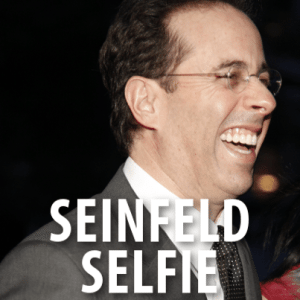 In Pop News, Jerry Seinfeld took his first selfie and the Queen of England is heading to the “Game of Thrones” set. (lev radin / Shutterstock.com)

Also, in Pop News, we got to see Jerry Seinfeld‘s very first selfie. He took a picture with his wife while on vacation in Greece. Jerry and his wife seem to be having a great time judging by the other photographs they shared including his wife hanging with her friend off a rope in the water and her enjoying a frothy beverage with Jerry.

GMA: Queen of England to Game of Thrones Set

The Queen of England is heading to Westeros. She will visit the Game of Thrones set while on her visit to Ireland. Prince Phillip will also be joining her.

Game of Thrones is estimated to be one of the biggest TV productions in Europe. The question is, is the Queen of England a fan of the show? As Robin Roberts said, how could she not be?

Cristiano Ronaldo has been known as one of the hottest soccer stars competing in the World Cup. But now he’s been named number one on Forbe’s World Cup Social Superstars list.

Cristiano Ronaldo’s social media presence reaches more than 117 million users, which is 12 times the population of his home country, Portugal. He has 86 million fans on Facebook and 27 million Twitter followers.

I’m sure the numerous postings of him working out, playing soccer, and posing for photographs has nothing to do his large following. And yes, that was sarcasm!

If you want to see Cristiano Ronaldo in action, team USA plays Portugal on Sunday June 22.