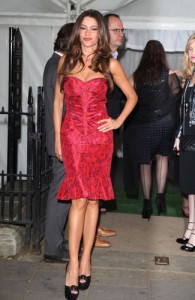 Sofia Vergara and others celebrated with the stars at this weekend’s Emmy Awards after parties. (Featureflash / Shutterstock.com)

Nearly 4,000 people crammed into the Governor’s Ball for the after party of the 64th annual Primetime Emmy Awards. And the theme of the right at the Governor’s Ball was “A Romantic Rhapsody in Red.” And no one skimped on the red. Massive rose petal were suspended form the ceilings, while 200,000 fresh cut roses adorned the 380 tables draped in, you guessed it, red linens.

And the decor was not the only thing red hot in the ball rom. Guests dined on smoked salmon avocado sphere appetizer and an entrée of roast tenderloin, mushroom risotto fries, parsnip creamed spinach and pearl onions with a red wine sauce. And for dessert, guests nibbled on white chocolate raspberry cake with fresh picked raspberries on top.

When they said ‘Rhapsody in Red’, they were not kidding.

And putting the extravaganza together was no simple affair either. The ball had 270 chefs on the clock making food, a waitstaff of over 700, 6,300 bottles of wine and for anything the guests could truly want that was not on hand, a handful of shoppers were deployed around town to pick up anything a guest asked for.

Jimmy Kimmel was on hand at the Governor’s Ball and said he was not too disappointed in the losing, even joking he hadn’t realized he had lost because he was in the bathroom.

Over at the AMC Party, Aaron Paul was on hand with his new fiance signing autographs for every person on hand. Bryan Cranston was also seen at the party, with a full head of hair, shooting the breeze with other guests.

The only thing Good Morning America said they were sad they missed? Sofia Vergala dancing. I am also sad I missed her dancing.

And of course there were a few mishaps at the awards as well. Vergala said the back of her dress ripped right down the middle mere minutes before she was suppose to go on stage with the Modern Family cast to accept an Emmy.