There really is little in this world more fun than watching grown men and women through balls at each other. While you may have forgotten the pleasure of playing dodgeball when you were younger, a lot of people remembered the love they had for the gym class sport when Dodgeball came out. Fans of the movie have reason to be excited today as it was announced by FOX that they have commissioned a sequel to the movie which will star Vince Vaughn and Ben Stiller. 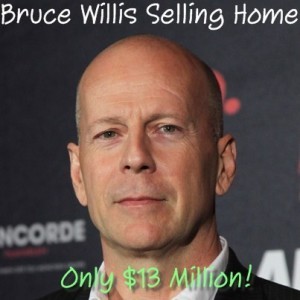 Good Morning America reported this morning that a sequel to Dodgeball has been commissioned and Bruce Willis is selling his home in Idaho. (image credit: vipflash, Shutterstock.com)

Finding the perfect man could be as easy as getting out a needle and string. A company in Holland has started making life-sized, hand-stitched man pillows fashioned off the customer’s ideal man. The pillows look like a cartoon version of a man with only boxers sewed on but you can also get the doll customized if you want. You want a doll with tattoos? No big deal. The beard isn’t full enough? They can sew on more beard hair. The company even has pictures on their website showing the different things you can do with your new pillow like watch TV with it or take it for a ride in the car.

Bruce Willis is selling his 8,000 square foot home in Idaho which he bought in 2003 after his divorce from Demi Moore. The home comes complete with a pool, gated entrance and a guesthouse all set on 20 acres of beautiful land surrounded by streams and an ample amount of woods for hiking.

He is willing to bargain with the price as well. He recently dropped his asking price from $15 million to $13 million.