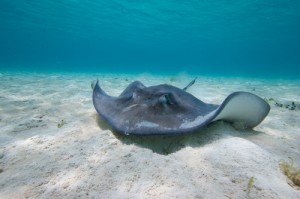 Good Morning America reviews Rihanna’s new single “Diamonds,” how chocolate can make you smarter and a photobombing stingray who scared tourists and onlookers.

Rihanna, the famous recording artists and less famous actress, is releasing a new single, “Diamonds,” today. The song will be on her new album, which has yet to be named. The album, which is the seventh she has recorded since realeasing her debut album Music of the Sun in 2005, has no release date as of yet. But her last two albums came out in November, so many people are speculating a November release date.

Rihanna descried ber new single, which she co-wrote with Australian singer and songwriter Sia Furler, as being happy and hippy, as well as saying the single is laid back but it is hopeful and gives her a great feeling when she listens to it.

One of the first lines of the song is, “I choose to be happy.” Glad to hear she is trying to better herself and get herself to a better place.

A new study has found that eating chocolate can make you smarter. The study, which was done on snails, revealed that when the snails were fed dark chocolate, they became smarter.

Now I am not sure how a human can be prepared to a snail but I’ll eat some more chocolate. And what does smart mean? Are there super snails out there in the world now? I mean snails are kind of gross and now we made them smarter.

Lots of people have been getting photobombed lately. And for anyone who doesn’t know what photobombing is, it occurs when a person is taking a picture of something and right before the picture is taken something strange happens, usually a person entering the shot out of nowhere and acting silly.

Anyways, some recent photobombs are of a seal getting in on a picture of penguins, David Beckham jumping in a photo booth with a bunch of fans and now a photobombing stingray nearly engulfing three women in water, as onlookers laugh.