Penelope Cruz to be Oldest Bond Girl Yet

According to reports, the 24th Bond girl will be Penelope Cruz. Cruz will star alongside Daniel Craig in the follow up to Skyfall. She will be the oldest Bond girl to date, following in the bikini of Halle Berry.

Penelope Cruz will have some work to do before fighting alongside Craig. She is due to give birth to her second child with husband Javier Bardem soon. 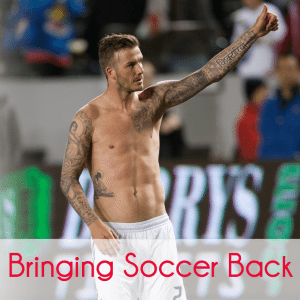 David Beckham is scouting soccer stadiums in Miami, Florida, in hopes of bringing a new soccer team to the state. Hillary Clinton joked about her style. (Photo Works / Shutterstock.com)

David Beckham met with Miami-Dade County Mayor Carlos Gimenez and tour several stadiums in Miami, Florida on Saturday. Reports are swirling that he could be spearheading a professional soccer team in Miami.

Beckham retired from soccer just a few weeks ago. Miami’s last soccer franchise, the Miami Fusion, was shut down in 2011 due to poor attendance.

The Council of Fashion and Design Awards went down this week in New York. Stars like Sofia Vergara and Kerry Washington wowed in jewel tones while paying homage to the men and women that make them look stunning 24/7.

The belle of the ball was actually Hillary Clinton! She presented the highest honor of the night, the Founder’s Award, to Oscar de la Renta. Clinton slayed the crowd with jokes about her own fashion. She said she was going to pitch a new show to Andy Cohen over at Bravo: Project Pantsuit.

The Gatekeeper in Sandusky, Ohio is the world’s longest winged roller coaster, the tallest inversion, and the longest drop. Cameron Mathison became one of the first people to master the beast. Cedar Point’s record breaking roller coaster is intimidating watching it at home, but I’m sure it’s an adrenaline rush to ride.

You not only plunge toward the ground, but you twist, turn, flip and slide through the air. You have to squeeze between two impossibly small openings, causing riders to scream in fear. Once they got off the ride, roller coaster masters were begging to go again.