Lara and Josh are stil in Los Anegles for the Emmy Awards after party. Emmy winner Aaron Paul and Emmy host Jimmy Kimmel are both celebrating engagements as well as the award show festivities. 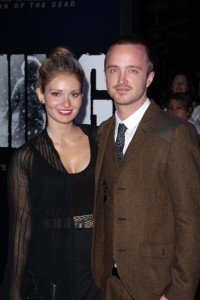 Good Morning America is all about the Emmys today, but for some actors, the Emmys are just one reason to celebrate. Emmy winner Aaron Paul and others are engaged. (s_bukley / Shutterstock.com)

Lots of couples were celebrating more than winning an Emmy this past weekend. Three of Hollywood’s biggest stars got engaged over the past week. Jimmy Kimmel, best know for hosting the previous Emmy’s and from his show Jimmy Kimmel Live, became engage to his girlfriend Molly McNeerny, one of the head writers on his talk show.

Aaron Paul, best know for his role as Jesse on the breakout show Breaking Bad, recently got engaged to his long time girlfriend Lauren Parsekian and also won the Emmy for Best Supporting Actor.

Jesse Tyler Ferguson, best know for his role on Modern Family, had a lot to celebreate on Emmy night. Ferguson recently get engaged to his boyfriend Justin Mikita and was also part of the show that won Best Comedy for the third year in a row.

No one can stop Betty White. At 90 years old, White has another Emmy nomination under her belt. White was nominated for Outstanding Reality Show host, but was beat out by Tom Bergeron, host of Dancing with the Stars. If she had won the Emmy, it would have been her seventh Emmy win, her first coming in 1971.

I really wanted Betty White to win. How about you guys? Any favorites that didn’t take home the little golden trophy? Let me know in the comment section below.