Home > Good Morning America > GMA Music
When you buy through our links, we may earn an affiliate commission. As an Amazon Associate we earn from qualifying purchases. Learn more.

It must good to finally win an Emmy after being nominated five straight years in a row. Tom Bergeron, the host of Dancing with the Stars, has finally beat out the competition to take home the gold. Bergeron, who won the Emmy for Outstanding Host of a Reality Show, beat out some stiff competition, including Betty White, who he joked was going to beat him up for winning the Emmy.

Bergeron said the Emmy should really go to the crew of the show, who he said do a great job putting the show on each week. He also said it was a great honor to win the award on the eve of the latest season of Dancing with the Stars.

As for who he thinks will win this season, Bergeron said he still has yet to see everyone rehearse and he said some dancing couples look like they still need to practice some more. 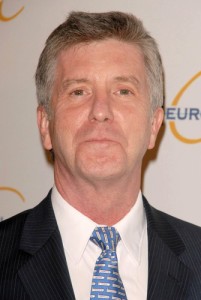 Ed O’Neill said the show would never happen without all the great writers behind every season. He also said sometimes he feels like they should flip a coin to see who wins, since everyone in a lot of the categories all deserved to win.

Aubrey Anderson-Emmons, who plays Lily on Modern Family, at the sweet young of only five years old, got to see what it was like to walk down the red carpet and also get on stage with the rest of the cast to accept the award for Best Comedy Series.

She learned how hard it was to find a new dress. It took her about 30 seconds to pick out a purple one. And how difficult hair and make up can be. She was done in about five minutes. She also played a few jokes on some of the other cast members. And everyone seems to know this will not be the last time Aubrey Anderson-Emmons is walking the red carpet.

Taylor Swift previewed the new single off her next album Red, which debuts in November. The single, titled “Begin Again,” is about going through a terrible breakup and pulling yourself together to get back out into the world to meet Mr. Right.