Home > Good Morning America
When you buy through our links, we may earn an affiliate commission. As an Amazon Associate we earn from qualifying purchases. Learn more. 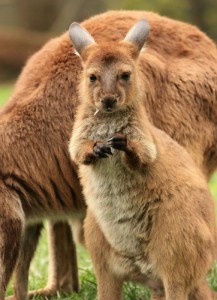 Jack Hanna brought four of his animal friends to teach us about the Australian outback.

Director emeritus of the Columbus Zoo and lover of all things wild Jack Hanna brought the Australian outback to GMA. From spiky critters to slithering snakes, Hanna educated us on his wildlife friends.

The echidna looks like a porcupine crossed with an armadillo. Hanna held it from the side and underneath, careful not to scratch one of the pointy quills. This animal is one of only two egg laying mammals in the world, the other being the platypus.

Dingos look like small dogs with pointy ears, but it’s important to remember that they are wild animals. Many people try to cross breed them with dogs, but Hanna had a true bred dingo to show us. It was very cute and it’s clear why people would try to domesticate them. Full grown, Meggy the Dingo was smaller than a labrador. Dingos can’t bark or yell and rarely yelp.

This reptile was given to Charlie Sheen to hold during the segment. As they handed it over, Hanna advised not to touch it’s mouth, which is identical to it’s tail. As a defense and cloaking mechanism, the shingleback snake is a sandy color and it’s head and tail are almost indistinguishable. Predators will bite down on their tails, thinking it’s their heads, and the shingleback will snap around. An amazing creature, it’s legs also run both backward and forward.

The cutest of all Hanna’s guest animals was Ingrid, a baby kangaroo. I’m sure they heard my squeals of delight all the way in New York. Ingird was a fuzzy little thing, still bigger than the dingo, and was nestled in a blue pouch bag. Hanna explained the breeding process for kangaroos. They start smaller than a fingernail in the mother’s pouch and stay there until they are grown. Ingrid seemed to really love her warm blue pouch carrier.

Having been to the Columbus Zoo and being familiar with Hanna’s animal philosophy, I was reminded throughout the segment that these are wild animals. As cute as they are, remember that they are wild and not meant to be pets. Hanna does an excellent job educating the world and making it a better and safer place for his animal friends.