Actor Richard Gere sat down with George Stephanopoulos to talk about his new movie Arbitrage. Gere also shared his reflections on where he was on 9/11.

“I forgot this was the 11th until I walked in here,” Gere said. “I was on my way to a retreat up in Massachusetts, I left early in the morning, I remember it was the most beautiful day, and it was such a beautiful day and I left at like seven in the morning and I was driving up to Massachusetts and it was such a beautiful day that I didn’t even want to radio on. So three hours later I’m up there and I come into this retreat place on the lake and everyone is stunned, I don’t know what’s going on, I knew nothing till I got there because I had the radio off, and they started telling me what was going on. I couldn’t call back home, the phones weren’t working, the cell wasn’t working, and I finally got through to the family and everyone was okay.” 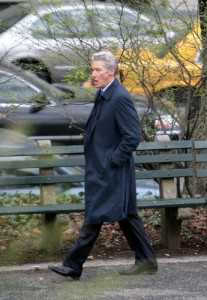 Richard Gere sat down with George Stephanopoulos to talk about his new film 'Arbitrage' that casts him as a morally corrupt Wall Street man. (Northfoto / Shutterstock.com)

Stephanopoulos asked Gere about Arbitrage, where he plays a Wall Street titan whose world is falling apart.

“You know when we made the movie, Bernie Madoff was kind of the archetype of everyone’s idea of corruption and money funds greed, all of that and by the time the movie was released it had kind of gone past Bernie Madoff, who was obviously a very sick man,” Gere said. “Now we’re seeing all these bankers and fund managers who are more like us, they’re more normal people certainly living a different stratosphere but make the same kind of moral bad decisions.”

Gere and Stephanopoulos talked about these “Master of the Universe” types who try to create their own moral universes.

“One of the things about this movie is people think we can compartmentalize our morality,” Gere said. “And in business we can be this, and at home we can be this and with our other relationships…it doesn’t work that way. Our actions, our thoughts, our morality resonates through every part of our lives.”

Stephanopoulos said that it’s interesting with Gere’s character because you know he’s a really bad guy, but at some level you’re still rooting for him.

“I’ve had close friends come up to me and say that,” Gere said. “They were really angry with me because they were rooting for the guy. Although, as you say, this guy makes some really bad decisions. But if you really look at the film, there’s nobody in this film that doesn’t make some bad decisions.”

Stephanopoulos showed a clip from the movie with Gere and Susan Sarandon, who plays his wife and has gotten very comfortable with their lifestyle.

Gere will bring home the Golden Icon Award from the Zurich film festival this year. Stephanopoulos asked him how it felt to be receiving lifetime achievement awards.

“Well the life isn’t over believe me,” Gere said. “So it’s a little premature…midlife…but these are the dinosaur awards, you know, you get a certain age and they start giving you this stuff. But it’s very nice, it’s very generous and very loving especially these European ones, the festivals that I’ve been to.”