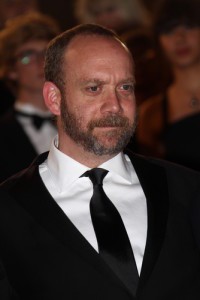 Paul Giamatti talked about the new movie he is starring in opposite Robert Patterson. The movie is about Robert Pattinson’s character, Eric Packer, a young millionaire who breaks down while on the way to his barber and eventually meets his potential murderer, played by Paul Giamatti. The movie will hit theatres this Friday, August 17 2012.

Giamatti said the movie is very “science fictiony”, with some satire and black comedy mixed into the plot. And although the novel the movie is based on was written over ten years ago, many current themes in America are prominently displayed in the film, including the Occupy Movement, said Giamatti.

Although Giamatti is hardly in the film at all, the final 20-minute dialogue between Pattinson and Gaiamti is mesmerizing. Both actors do an amazing job in the scene shown on Good Morning America.

“No girls were coming around and I thought ‘I get more girls than him,’” said Giamatti about being on set with the heartthrob.

Giamatti also talked about being on the set of Rock of Ages saying he didn’t exactly like the ’80s when he was in high school but it was fun to play his character. He said he loved wearing the ponytail.

Giamatti can also be heard as the voice of Franklin D. Roosevelt in a new Ken Burns documentary scheduled to be released in 2014.