Could it be? Could Lady Gaga be pregnant? Let me know what you think in the comment section below.

Lady Gaga said she is not ashamed at all of her 25 pound weight gain. She said Christmas was good on the lips, but not on the hips. I’m not sure she knows what she is trying to say, but she is right, it was not good on her hips.

Lady Gaga tweeted to her 3 million fans on Twitter thanking them for being supportive of her weight gain and knowing what real beauty and compassion is. Lady Gaga also said she was not ashamed of how she eats, adding she loves pasta, pizza and gorging on other foods with her family. 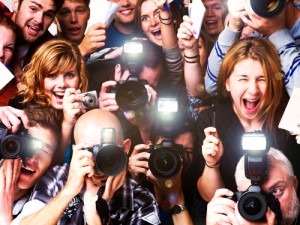 Good Morning America talks about Lady Gaga’s weight gain and who were the best and worst dressed at the Emmys.

Lara said the theme os the Emmys this year was no sleeves and nothing covering the shoulders. Lara said it was around 100 degrees as the Emmy’s kicked off. Some of the top dresses at the Emmys were worn by Amy Poehler, who wore a gorgegos sequin dress, Sofia Vergara, who at the age of 40 was the hottest women on the red carpet, and Julianne Moore, who nearly shut down Twitter with all the posts she was tagged in.

Joe Zee, the Creative Director at Elle Magazine, and Suze Yalof Schwartz, founder of www.skinnytallrich.com, joined Lara Josh to talk about all the fashion hits and misses on the red carpet.

Everyone agreed Nicole Kidman was looking stunning on the red carpet as well as Zooey Deschanel is a very fairy tale-ish dress with lots of frills and a large flare at the bottom. Everyone was also stunned by Tina Fey who they said looked great in her dress and was a surprise to see her look so elegant.

Good Morning America got a behind the scenes look of the new season of Dancing with the Stars, which will have the season premiere tonight. Good Morning America talked to some of the couples on the show, all of whom said they are still working on their moves and trying to get the dance done to perfection. And do not worry fellas, all the women on the show will still be wearing next to nothing when they dance.

Good Morning America said although it is super hard to choose who may be the dancing couple to take home the gold, their bets are on Sabrina Bryan and Louis van Amstel.