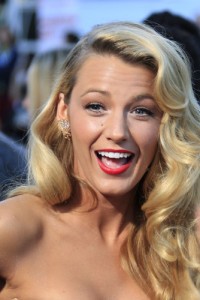 Good Morning America’s Lara Spencer shared the day’s hottest celebrity headlines for September 10 2012. Get the scoop on the surprise Blake Lively Ryan Reynolds wedding. Plus, find out what Britney Spears has to do with Twister, Victoria Beckham’s fashion show, and Andy Murray’s 007 encounter.

Gossip Girl star Blake Lively and Most Eligible Bachelor Ryan Reynolds were married on September 9 2012 in South Carolina. Florence Welch of Florence and the Machine performed at the couple’s reception.

The couple owns a home in Bedford, New York, and have been together for about a year, since meeting on the Green Lantern set.

Victoria Beckham tweeted a picture of herself with her head covered by a bag, saying the pace and pressures of fashion week led to a lack of sleep, which made her “feel like an old bag.” Her fashion collection was reportedly “a huge hit, emphasizing body-hugging, waist-cinching clothes,” according to Lara Spencer. There was even a paparazzi shot of her husband in the audience for the show.

The X Factor judge and pop singer Britney Spears is also offering a new celebrity endorsement for Twister Dance. She is appearing in a dance video ad campaign for the latest iteration of the enduring board game. She’s engaged to Jason Traywick, and she will be popping up in her X Factor role when the show kicks off a second season Wednesday night, September 12 2012, on Fox.

Andy Murray is an Olympic gold medalist and US Open finalist. But he got another unexpected honor this weekend. He and his mom were introduced to former James Bond Sean Connery, and Lara speculated that his mother enjoyed that the most of all her son’s recent accomplishments. Murray will go on to play in today’s round at the US Open.