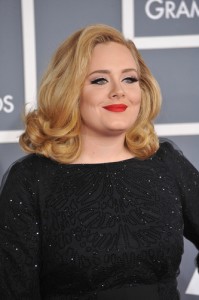 Rumor has it that Grammy-winning singer Adele has married her boyfriend Simon Konecki. (Jaguar PS / Shutterstock.com)

Rumor has it that Grammy-winning singer Adele has married her boyfriend Simon Konecki as recently as this morning. A source told London’s Daily Mail that the singer wore “a classic dress and Simon looked very smart and joyous.” No other details were revealed. The source also said, “”She’s an old-fashioned girl and can’t wait to be part of a family unit. She just wants to focus on the baby and the man she loves.” Adele was also reportedly spotted with a gold band on her ring finger.

Adele and Simon are expecting their first child together this fall. The “Someone Like You” singer has kept a low profile during her pregnancy. The 38-year-old Konecki has a child from his previous marriage to fashion stylist Clary Fisher.

Taylor Swift is talking to Rolling Stone about her new album, Red. Swift says she “went through a roller coaster regarding her relationships and while she knows general things about love, like how to treat people well, what she deserves and when to walk away, other than that love is a total mystery to [her].”

Perhaps Taylor will learn more about love from 18-year-old Kennedy, son of Robert F. Kennedy Jr. However, she clearly hasn’t learned manners from him. The pair failed to RSVP to the recent wedding of Kyle Kennedy and were asked to leave by the mother of the bride.

The first single from the album, “We Are Never Ever Getting Back Together” has already broken records. Red drops October 22 2012.

A dad posted a video of his twin baby girls on YouTube. While he plays the guitar, the girls move back and forth in their high chairs with the same dance move. The adorable video has over two million views.