Zac Efron came by Good Morning America to talk about his new role in the upcoming movie At Any Price. The heartthrob has taken some gritty roles lately to shed his Disney High School Musical image. Although this isn’t making headlines the way fellow High School Musical star Vanessa Hudgens did when she made Spring Breakers, it is definitely worth noting that the guy who was singing songs just seven years ago about not wanting to think about some girl he just met in homeroom that morning is now making movies where he can swear and drink.

Need another example? In The Paperboy he and Nicole Kidman had a “romance,” even though she is 20 years older than him. That movie was, admittedly, essentially just an extremely dirty version of the “boy has to rescue girl” plot, the premise of everything from Super Mario Bros to Taken. But it did make you remember that besides his good looks and being in the embarrassing-for-everyone-involved movie 17 Again, the guy can act. 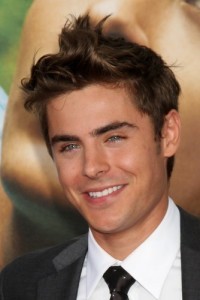 Zac Efron came by GMA April 18 2013 to talk about his new movie, At Any Price, taking grittier roles and what kinds of movies he wants to make. (Helga Esteb / Shutterstock.com)

In the new movie, he plays a son of an Iowa farmer, who Josh Elliott called a “rebel with a cause.” Zac Efron said he did this movie to work with the director, who he said was “an incredible filmmaker.” He said it was also cool to play a rebel who is fighting against everything his father is standing for.

Efron’s father is played by Dennis Quaid in the movie and he said it was cool working with him. He said that Dennis Quaid’s character is struggling between expanding his farm and the protection of his family. He said that the movie examines the state of America today.

In the movie, Zac Efron plays an aspiring racecar driver. He said there’s no traction in the car and so when you do rotations on the wheel, it doesn’t do what you necessarily want it to.

Zac Efron said that he tries to choose his roles one at a time. He said that he really tries to do the projects that speak to him and he surrounds himself with people that want to do that, too. “I really want to make good movies, and I feel blessed to be here in this position to still be able to do that,” he said.

Zac Efron came off as extremely together and intelligent in this interview. I started college right when High School Musical was coming out and every girl I knew watched those films, nostalgic for their high school days, thinking he was oh-so-attractive. So I sort of rolled my eyes when I heard he was going to be on GMA today. I’ve never really taken him seriously, even when I was watching The Paperboy. But this interview changed my mind about him. Zac Efron knows what he is doing and if he makes mistakes along the way, that’s something the rest of us are guilty of, too. But he’s definitely going somewhere and I believe him when he says he wants to make good movies. Here’s hoping At Any Price is a good movie.