The Wonder Years cast had a reunion recently, two decades after the show went off the air. ABC’s Chris Connelly was there for Good Morning America when the cast reunited for the first time in 16 years. 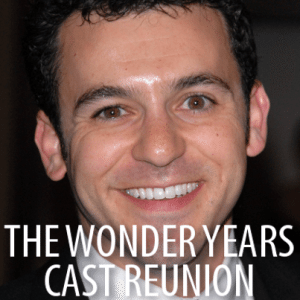 The cast of The Wonder Years got back together for the first time in 16 years. (s_bukley / Shutterstock.com)

Fred Savage, who starred in the show as Kevin Arnold, spent time looking back on their time on the show together. He said, “We were so little, and so young, and it was such a big part of our life. It was half our life at that time.”

The Wonder Years was set in the 1960s and ran for six seasons in the late 1980s and early 1990s. The coming of age stories elicited tears as often as laughter, and became a favorite among TV viewers. In fact, the kiss between Fred Savage and Danica McKellar, who played Winnie Cooper, was the first kiss for both of them, on camera or off.

Though some people still think that Josh Saviano, who played Kevin Arnold’s best friend in The Wonder Years, Paul Pfeiffer, is actually Marilyn Manson. Apparently, he had been asked on Twitter only moments before Chris Connelly asked him about that strange belief held by so many people. Josh Saviano said that he think it was one of the first internet rumors, and therefore it doesn’t die.

Danica McKellar is an adult actress on The West Wing, math scholar, education advocate on Twitter, and last season even added Dancing With the Stars to her resume. She said she feels like she has the best life ever.

You can now get the entire series of The Wonder Years on DVD, plus special features and outtakes.