Academy Award winning actress Susan Sarandon, who has more than 60 movies to her name, sat down with Good Morning America’s Amy Robach to talk about her upcoming roles. Sarandon is in six movies this year, including Arbitrage with Richard Gere, who paid a visit to GMA Tuesday.

The star also brought her dogs, Penny and Rigby, along to the show.

Sarandon Looks for Different Roles with Each Movie 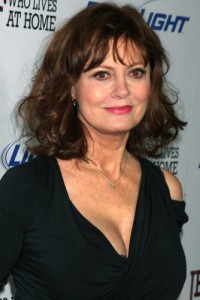 Sarandon has had a variety of roles, from sex symbol in Bull Durham to her Oscar-winning portrayal as a nun in Dead Man Walking.

“I consider myself a character actor which is why I probably have had the longevity that I have,” Sarandon said. “I want to be fun, first of all, and when the kids were small then I wanted it to be in New York but that didn’t always work out. You look at the director, but Arbitrage, I mean I have a few movies coming out that are first time directors so you don’t always know if you’re going to be lucky with the director or not so the part has to be something that’s fun and of course working with Richard, I love Richard and that made it really special for me.”

In Arbitrage, the actress plays the wife of Gere’s character. Sarandon and Gere have played a husband and wife team before, and they’ve known each other for many years. She’d love to find a role as a mistress instead of a wife, because to her they seem to have more fun.

Robach showed a clip from Arbitrage, where Sarandon’s character has a conversation with her daughter about her husband’s shady behavior.

“I don’t think it’s the mistress that creates the crisis, I think that after being with someone for 40 years or 30 years, whatever it is, you start to negotiate a little bit, and maybe she’s not so threatened by the other women, but he steps over the line where the daughter’s concerned and implicated, you know brings her into this web and so suddenly that’s for me when that’s the deal breaker.”

Another one of Sarandon’s movies that’s coming out is Cloud Atlas, which is adapted from a book of the same name. Sarandon said the movie deals with several time periods and that everyone plays different races and genders.