In Vince Vaughn and Owen Wilson’s new film, The Internship, two middle aged men get sacked from their jobs and decide to go back into the shark tank. Only when they get back into the job hunt, they find that they need to complete internships in order to make it at the company of their dreams: Google. The guys enter what Wilson calls the “Mental Hunger Games” against a class of up and coming 20-somethings.

While this seems like a far fetched idea, it’s the world that many men and women are facing. The “Returnship” is when an experienced and mature adult tries to break into the college grad’s field and learn new tricks and tools.

Ken Blanck was tired of his finance job. He sold his house and moved to Buffalo, New York, where he is completing an unpaid internship to learn design. The 46-year-old intern met some strange remarks about age and his choice, but he loves what he’s doing.

“Everybody thinks I’m nuts for doing this,” Blanck said, but he’s gotten support from friends and said it’s worth it to do something you love. 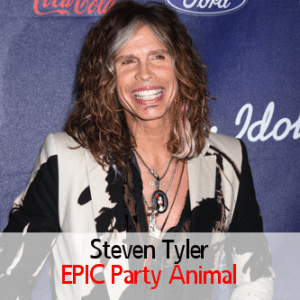 Aerosmith’s front man and former party animal, Steven Tyler is taking on a new role as “The Sage of the Forest” Nim Galuu in EPIC. (Joe Seer / Shutterstock.com)

Aerosmith’s lead singer Steven Tyler is looking a little different these days. Or maybe it’s just his new character. In EPIC, Steve Tyler takes on the role of a cryptic caterpillar alongside Josh Hutcherson, Amanda Seyfried, Beyonce, and Pitbull.

Tyler said that he first heard of the project when he saw Ice Age, produced by Blue Sky. He loved watching the film with his kids and the creator of the character Skrat called him up. He showed him the beginning stages of Nim Galuu, “The Sage of the Forest,” and Tyler was all in. He wanted something that he could sit down with his grandson, Milo, and say “That’s granddad.”

“I did an interview with Oprah and she asked me where I got my spirituality from,” Steve Tyler said. “I said the silence of the woods, kind of a strange thing until you hear it. I knew there was something there, I just couldn’t see it.”

He called his new character wrote in a special song for him about five months ago.

Near and dear to Steven Tyler’s heart is the Boston Bombing tragedy. He’s performing in the Boston Strong concert to benefit the victims. The day that he heard about the bombing, Aerosmith was getting ready to depart on tour. They considered staying home to embrace their fellow man, but had to go on. The concert, featuring other amazing artists like Jimmy Buffett, was a no brainer to say yes to.