Actor Steve Carell came on Good Morning America March 13 2013 to talk about his new movie The Incredible Burt Wonderstone. Steve Carell was on earlier in the show talking about the movie and the new Anchorman film, but George Stephanopoulis sat down with him for a proper interview.

The clip they showed from the movie showed Steve Carell’s character Burt Wonderstone, a magician, make an elderly woman’s jewelry disappear. When the woman began to cry, thinking he was just being careless, he explained that he was a magician and that he probably should’ve mentioned that earlier. It was a pretty good gag. 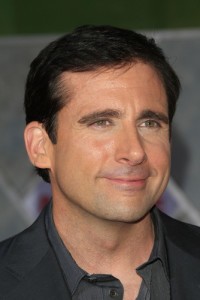 Steve Carell came by GMA March 13 2013 to talk about his new movie The Incredible Burt Wonderstone and playing a murderer in Foxcatcher. (Joe Seer / Shutterstock.com)

Steve Carell said that he had a magic kit when he was a kid and that he loved not knowing how the trick worked. He said he wanted to keep the magic alive. But he did work with magician David Copperfield, who designed a magic trick called The Hangman for the movie.

Steve Carell produced the film and helped bring the cast together. He said that it’s a good cast. He said Jim Carrey was the hardest one to get, because he’s a wild card. But he read the script and he loved it. The cast also includes Olivia Wilde, James Gandolfini, Steve Buscemi and Alan Arkin.

Steve Carell will be playing a murderer in his next film, Foxcatcher, the story of John du Pont. He said the role is a departure and that he’s mixing it up. I know I will be watching that one. Michael Scott, a murderer? It just reminds me of the classic Office episode where, in order to distract the employees from troubling rumors about the company, Steve Carell’s character Michael Scott holds a murder mystery party and keeps saying in a terrible southern accent, “There has been a murder.” I’m going to be watching Foxcatcher just to see how he does playing a role as serious as that one.

What do you think? Do you think Steve Carell can pull off a serious role?