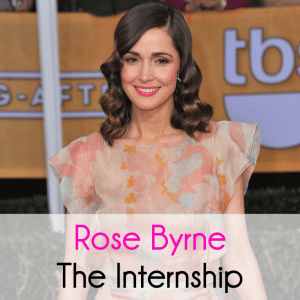 Rose Byrne said that her characters are usually a little uptight, but in The Internship, she gets to hold her own comedy against Owen Wilson & Vince Vaughn. (Featureflash / Shutterstock.com)

In Vince Vaughn and Owen Wilson’s The Internship, Rose Byrne is the uptight and driven power woman in a man’s world. She works for one of the biggest companies in the world, Google, and is a stereotypical working woman. She doesn’t have a family and she only sees climbing the corporate ladder. Mix in the lighthearted humor of Owen Wilson and you could have a recipe for corporate disaster.

Of course, you know Rose Byrne as Helen, the uptight and conniving bridesmaid in Bridesmaids. She said that while Helen takes herself seriously, her Internship character has more of a sense of humor. She is able to hold her own against the characters. Robin Roberts said that she does a great job of keeping up with the comedy and we need her characters.

Rose said that her celebrity crush is Leonardo DiCaprio and her secret talent is a back bend. The Internship opens June 7 2013.

As a country star, Darius Rucker is one of the hottest sounds for the summer. His track “Wagon Wheel” is getting major play time and he’s got a new album, True Believers, coming soon. Rucker said his happiest day was being inducted into the Grand Ole Opry, but his solo career isn’t going to overshadow his past.

“We’re never going to stop being a band,” Darius said that Hootie and the Blowfish will continue, no matter where his solo career takes him.

Rucker played “Wagon Wheel” with his band and rocked the crowd while Sam Champion and Lara Spencer jumped in their moon bounce shoes.