Miranda Kerr is most famous for her body and for flaunting her curves on the runway with a pair of fluffy wings strapped to her back. Kerr and Victoria’s Secret still have an excellent relationship, but she’s no longer under contract with the underwear mogul. She said it was a mutual decision and is off to bigger things. 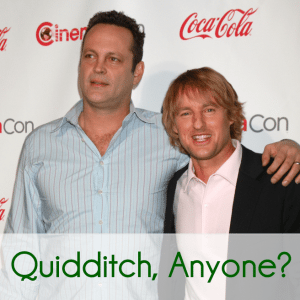 Vince Vaughn’s new movie, The Internship, was filmed at Google headquarters. He told GMA about the tricked out offices and playing quidditch at Google. (s_bukley / Shutterstock.com)

Most recently, Miranda Kerr has become the spokesmodel for Gillette Venus razors. She’s been promoting their Step Up and Step Out empowerment campaign in New York City.

In her personal life, Kerr is blessed with two handsome men, her son, Flynn, and husband Orlando Bloom. She’s also working on an organic skin care line, Korra Organics. She recommends dry body brushing, the Korra Organics energizing body mist and a great razor, like the Venus. She also has a unique trick for curling eyelashes. Mascara your lashes and then pinch them between your finger and a spoon. Voila! Curled lashes.

In The Internship, Vince Vaughn and Owen Wilson play two laid off men that want to go back into the job market at a place they can have some fun. What better than Google headquarters, which is a playground for adults. Vaughn co-wrote, produced and starred in the film, opening June 7 2013.

Vaughn said that Google was pleased to see a more comedic side of themselves. He said it felt like a Sandals Resort or Qanatas Airlines pod. They also play quidditch at the headquarters, with a tricked out field. He said it was weird to run with a broomstick between your legs.

Reuniting with his pal Owen Wilson was special. He said he brings a lot of heart to the film. If there were both interns at Google, Vince said he would be the better intern because Owen wasn’t there to present his case.