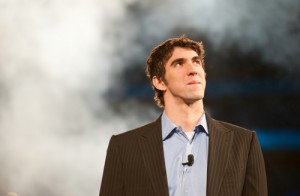 The Michael Phelps Haney Project for the Golf Network will see the former Olympian honing his golf skills on the links. (Randy Miramontez / Shutterstock.com)

Good Morning America reports Michael Phelps will be the next celebrity to take part in The Haney Project, a show on the Golf Network that lets celebrities try to improve their gold game on some of the best golf courses in the world. And Phelps may have an edge this year. His coach will be Tiger Woods’ previous golf coach.

Although he may be a great golfer, Good Morning America seemed a bit skeptical if he is going to do well or not.

Miley Cyrus has a new haircut and many of her fans do not agree with the new look. Miley tweeted she was going to cut her blonde locks off and didn’t balk at the chance. Her new half shaved head was met with a little resistance from her fans but she tweeted, “If you have nothing nice to say, don’t say anything at all.”

She later tweeted, “Never felt more me in my whole life.” What does Good Morning America think? She looks like a punk rock Peter Pan and seems to be getting rid of the Hannah Montana look.

Team Great Britain is in a new ad for Adidas. Even David Beckham took part in the commercial, acting as the director and even making fun of himself when he yells cut, alluding to him being cut from the Olympic team.

Daniel Beck, the alligator’s trainer, was attacked last Thursday at the Cuyahoga County fair near Cleveland, Ohio. As Beck stuck his arm in the alligator, the animal bit down on his arm for an excruciating 22 seconds before he let the trainer go. Beck said he was alright and only required a few stitches.

As Good Morning America put it, “It went as well as an alligator bite could have gone.”