Good Morning America showed part of Katie Couric’s interview with the cast of The Mary Tyler Moore Show, which will be shown in full on Katie on Monday, April 8, 2013. Katie Couric told them that she was honored to be with them because the show inspired her to have a career. She asked what it was like to work with each other again on a special episode of Hot In Cleveland. Mary Tyler Moore said it was wonderful and that none of them have changed. Betty White added that “gravity has taken over a little bit.” 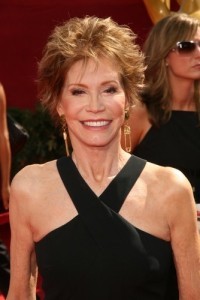 Valerie Harper said she thought the show really reflected women’s lives in the seventies and that’s why it was so popular. Katie Couric asked why they thought people were so attracted to Rhoda. Valerie Harper said that a friend of hers once told her that Mary is who everyone wishes they were, but Rhoda is who they probably are. She also added that Phyllis was who you were terrified of becoming. Georgia Engel said that she thought her character, Georgette, was supposed to be the slow one, but sometimes she said the wisest things.

Valerie Harper shocked a lot of people recently with her announcement of having a rare form of brain cancer. Betty White said that Harper is so positive and that’s 90 percent of recovery. Harper added, “Don’t go to the funeral until the day of the funeral.” Katie Couric noted in a voice-over that this may be the last time the cast will be together. Mary Tyler Moore said that they were lucky to be working with their best friends. Betty White said they’re more than family.

GMA uncovered some secrets to younger-looking hair. They went to Greta Monahan, a beauty expert. She said that if you’re in your thirties and forties, she recommended a thickening agent that you put on wet hair. She also recommended a restorative oil like L’Oreal’s Total Repair 5. Monahan said that it adds a protective element and returns a shine to their hair. Experts also suggest loosening the hair, because any time the hair is moved in a way that’s not natural for it, like a ponytail or with clips, it can stretch or snap the hair.

GMA had special freebies for you on their website April 5 2013, for as long as supplies last. First up was a coupon for a free blueberry almond Pinkberry Greek yogurt. The coupon is good for April 5 and April 6 2013. Next was Anthony Robbins’ most popular CD/DVDs absolutely free. One was about getting the wealth you deserve and the other was about changing your life right now. Then, there was another coupon for free lip gloss. Don’t miss these great deals!