Good Morning America reported April 10 2013 that in the wake of claims by blogs that Amanda Bynes is mentally ill and pictures showing Amanda Bynes smoking a suspicious-looking cigarette, the child star has taken to Twitter to deny rumors that she’s mentally ill. As anyone who grew up in the 90s or had children who grew up in the 90s knows, Amanda Bynes got her start on the Nickolodeon show All That, before having her own variety show called The Amanda Show. 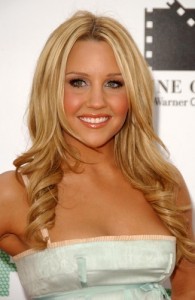 Amanda Bynes has made a lot of headlines recently as everyone from mommy bloggers to the paparazzi questions whether she’s mentally ill. (s_bukley / Shutterstock.com)

Now, she’s the constant focus of vicious paparazzi looking for another Lindsay Lohan and Paris Hilton and willing to print just about anything. Well, that’s my opinion, anyway. GMA says that Amanda Bynes may be having serious trouble. Last April, Amanda Bynes was arrested for a DUI after allegedly crashing her car into a cop car. Then last fall, she was dropped by her management team. One interesting point from the story was that Amanda Bynes seems to be facing this alone, because she’s never photographed with other people, which makes the mommy bloggers call this whole thing “sad.”

Her new look of blonde extensions and pierced cheeks made many people pause. But Amanda Bynes said on Twitter, “I’m suing certain blogs and magazines saying I have a mental illness.” She also was reportedly thrown out of gymnastics for wearing fishnets and a wig. She later tweeted, “I’m suing every blog saying I got kicked out of gymnastics.”

But I have to ask, is this a real story? I mean, remember the days when Britney Spears shaved her head or Mariah Carey made Glitter and everyone was certain both stars went off the deep end and wouldn’t be coming back? Amanda Bynes will surprise you, America. That’s what I think. Maybe she just needs a friend. Or a good lawyer, since she’s apparently going to be suing everyone. What do you think? Do you think she’s beyond the point of help? Do you think she’s mentally ill?

And speaking of Lindsay Lohan, she was on David Letterman recently where she talked to him about heading to rehab on May 2. David Letterman asked her the hard questions, instead of keeping it light. He asked her, “Do you have addiction problems?” There was a pause and then she said, “Now you sound like Dr. Phil.”

Sam Champion wondered what his children were supposed to take away from people like Lindsay Lohan and Amanda Bynes. “I don’t know that I want these images to be the ones that my kids see and think that these people are cool,” Sam Champion said.

I don’t know. There are still plenty of positive female role models for young girls. Like Kristen Stewart and Jennifer Lawrence. I think a lot of young girls would rather be like Katniss and Bella than like the girl from Herbie: Fully Loaded or Mean Girls. Is it okay that we’re teaching these girls it’s cool to be in love with 100-year-old vampires that stalk young girls or that it’s cool to be the only survivor of a violent bloodbath? I don’t know. But you have to admit that those are more positive role models than Lindsay Lohan.

What do you think? What’s the most positive role model for young girls today in pop culture?

Halle Berry is expecting a child at age 46 and GMA wanted to know if more older women are having babies. It seems like the answer is yes, at least if you ask Hollywood women. Actress Kelly Preston had a child at 47. Mariah Carey had her babies at 40 and so did Nicole Kidman. So what gives?

The astute watcher of GMA might remember that they basically already did this story a while back in February, only with men having babies later in life, instead of women. In that story, a relationship expert named Seth Myers told us that having a child later in life can give you a tremendous sense of purpose. In this story, the Center For Disease Control reported that babies for women 40-44 are up 10 percent from 2007 to 2011, even though fertility is supposed to start dropping at 30. Modern technology, it seems, has tremendously improved the ability for couples to conceive later in life.