Kristen Johnston recently opened up to People Magazine about the rare form of Lupus that took seventeen doctors to diagnose. Is the middle initial losing popularity? Two stars are speaking up about body image. Plus, one father makes his daughter’s dreams come true in Good Morning America’s Heat Index. 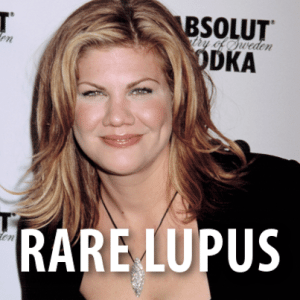 “It was like I was swimming through molasses; I couldn’t even hold my own neck up,” Kristen Johnston said. She said she knew something was wrong in the summer of 2013 when she had trouble climbing a flight of stairs.

After four months, an array of tests, and 17 different doctors, Kristen Johnston was finally diagnosed with Lupus Myelitis, a rare form of the disease that attacks the spine, and can result in paralysis if left untreated.

People Magazine reporter Patrick Gomez said that doctors say if Kristen Johnston had waited even a few more weeks, she could have ended up as a quadriplegic.

This is Kristen Johnston’s most recent struggle, and in 2012 she opened up about her addiction to alcohol and painkillers on Good Morning America.

Kristen Johnston is still sober and receiving treatment for Lupus, so she’s decided to continue working, and feels thankful to be alive.

Two big stars are speaking up about body image. John Legend’s new music video for “You & I” is going viral right now, which features women of all different shapes, sizes, and races, including his wife Chrissy Teigen, as well as Orange is the New Black actress Laverne Cox. The video already has 6 million views.

Colbie Caillat is also sharing a similar message in her music video for the song “Try.” The video features Colbie Caillat, as well as other women, show off their natural beauty by removing their makeup.

Jeremiah Heaton is making his seven-year-old daughter, Emily’s, dreams come true. Emily had dreams of becoming a princess, so Jeremiah Heaton searched for unclaimed land around the world on Google, and found an 800 square mile patch of desert in Africa between Egypt and Sudan. Jeremiah Heaton traveled to the area and made his claim. The family plans on calling the area The Kingdom of North Sudan.