If you thought Bridesmaids was raunchy, get ready for Bachelorette, the new comedy starring Kirsten Dunst, Lizzy Caplan, and Isla Fisher. The film first debuted on iTunes and is now getting ready for its big theatrical release. On GMA September 5, the three lovely ladies talked to Elizabeth Vargas in Times Square about what makes their film so laugh-out-loud funny. 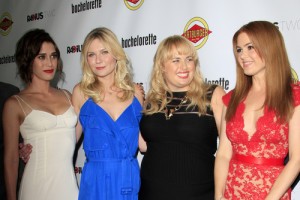 Bachelorette follows three high school friends who come together for the wedding of their fourth friend, played by Rebel Wilson, who used to be referred to as “Pig Face” behind her back. When their plans for a traditional bachelorette party go awry, the ladies are left scrambling to patch things up, with only hours left until the big day. The movie is so racy, that Kirsten advised her own dad not to see it!

Isla Fisher had a story to share that was apropos, but not quite appropriate for daytime television! When her own mother got married, Isla decided to host a bachelorette party at a strip club, thinking that it would be funny. However, Isla was “traumatized” when she went to the bathroom, then returned to find her mom on stage with a naked man ready to “tea-bag” her.

Elizabeth didn’t know what “tea-bag” meant, which is probably for the better; that’s one phrase that slipped right past the censors! “Good morning, America!” Lizzy joked.

The reason that Bachelorette is so funny and relatable for women is because it was written and directed by a woman, Leslye Hedlund. Lizzy explained that the film is based on a series of plays that Leslye had written based on the seven deadly sins. Bachelorette is representative of gluttony.

Bachelorette opens in theaters on Friday, September 7 2012. I’ve seen the film, and I highly recommend it; it’s hilarious, but make sure you leave the kids at home!