The English Teacher stars Julianne Moore and Nathan Lane are more than co-stars, they’re best friends. Nathan Lane said they were siblings in another life. 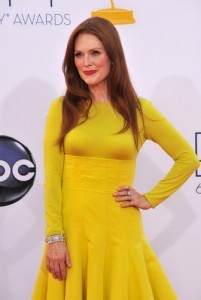 Julianne Moore and Nathan Lane shared their inside jokes and close friendship on GMA. Their film, The English Teacher, is now in theaters. (Featureflash / Shutterstock.com)

When Julianne heard of the role in The English Teacher, she wrote a personal plea to his manager for Nathan Lane to play the role. She said she has always wanted to do a project with him. She joked that he used to ignore her at parties, but she finally got through to him. They had a hard time completing the interview because they kept telling inside jokes and cracking each other up.

In the film, Moore plays an English teacher that finds safety in her books. She knows that nothing can harm her when she is immersed in the fantasy worlds. Her best friend is a drama teacher (Nathan Lane) who feels the same way about plays. They try to put on a rather heady play, not meant for high school students. Lane called it a “pretentious, thesis play.”

Nathan Lane recently acquired a Tony nomination for his role in The Nance. Lane plays Chauncey Miles, a gay burlesque dancer battling a changing world and his own demons.

The English Teacher is now playing in theaters.

For his U.S. fans, British singing sensation Olly Murs released a special edition of his album, Right Place Right Time. The album includes tracks like “Dance With Me Tonight” and “Heart Skips a Beat.”

Olly played “Troublemaker,” his hit single getting major play across the globe. He and his band brought the music out to Times Square. He greeted fans and rocked out. While “Troublemaker” might be the reason you buy Right Place Right Time, you’ll stay around for “Dance With Me Tonight” and “Dear Darlin.”

Olly Murs is currently on tour. He said a special thank you to everyone that has come out to his shows, they’ve encountered so many amazing and welcoming people on the road.