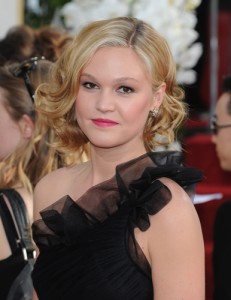 The Makeover is a modern day telling of Pygmalion and My Fair Lady. Stiles plays a woman who wants to run for congress in Boston, but she loses because people find her unlikable. She searches out someone the public will like and tries to turn the working class man into gentleman. Along the way, she is surprised by his transformation and a love story develops

In a clip from her new film, Julia Stiles helps Elliot Doolittle, a beer seller from Boston played by David Walton, learn proper diction. In the spirit of “The Rain In Spain Falls Mainly In The Plain,” Doolittle tries to say “I parked the car in the far side of the yard” with a very thick Boston accent.

For the past few years, Stiles has been working in drama and serious roles. Her role on Dexter was a reformed serial killer. She decided that it was time for a lighter, romantic comedy. She called herself a hopeless romantic and wanted to have fun and laugh at work.

Her movie Silver Linings Playbook is up for Academy Awards, so of course Stiles is pulling for her cast. She said that she enjoyed Zero Dark Thirty and thinks it will do well at the Oscars.

GMA: Julia Stiles Between Us

Stiles was set to start a play on Broadway, but it fell through suddenly. She began to panic, but got a call from her agent and found out a role was open in the film Between Us. It’s based on a play and co-stars Taye Diggs. The film is now getting attention at the Sundance Film Festival.