Good Morning America reported April 9 2013 that 35-year-old A.J. McLean, who was in the Backstreet Boys, has now gotten a hair transplant. Does it weird anyone else out that a Backstreet Boy is old enough to get a hair transplant? Anyway, McLean put photos of his hair transplant on his Instagram page. The star isn’t ashamed of the change and the hair looks like a good change for him. 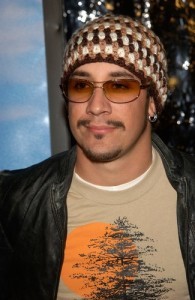 Wait. Is that why he was always wearing hats? (Featureflash / Shutterstock.com)

Jane Fonda’s adopted daughter Mary Williams has written a book called The Lost Daughter, a memoir of her life. Mary Williams and Jane Fonda met when Williams was a child. Williams’ parents were Black Panthers at the time and Mary was suffering in the neighborhood she grew up in. She was a victim of sexual assault at 14.

Jane Fonda told her that if she brought her grades up and if her mother permitted her, she would let Mary Williams live with her in California. Williams went from being poor in the inner city to moving into a beautiful big house in Santa Monica with a rich family. Wait. Does this remind you of the plot of The O.C.? Well, apparently Mary Williams adjusted better than Ryan Atwood did, because no one mentioned any fistfights with local water polo team members or living in empty McMansions.

What really happened was much different. Mary Williams tried to merge her influences from the Black Panthers and Jane Fonda, who she said were as different as can be, but had the commitment to politics in the name of making the world a better place in common. Williams grew up with that same commitment. She taught English and worked for the UN in Morocco, helped relocate Lost Boys from Sudan and biked across the U.S. But eventually, she knew she had to go find her birth mother. Jane went with her and the three of them went to lunch. Jane and Mary laughed as they remembered the meeting, thinking of it fondly. Williams said that Jane Fonda didn’t even know how amazing she’s been, because she saved and changed her life. Despite my O.C. joke, this really is an amazing story and it sounds like a wonderful book.