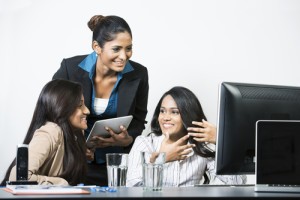 Sheryl Sandberg, Facebook COO, said that women need to work together to be taken more seriously in the workplace. Her book, Lean In, is all about women taking charge of their careers.

Robin Roberts asked the women in the room how many of them feel like they don’t lean in or try to take charge in the workplace. Many women put their hands up and one woman put two hands up. Sheryl Sandberg said she wasn’t surprised, because she sometimes feels insecure and feels like she can’t do something, even with all the success she’s had. She said, “As women, we’re taught to downplay our success.”

The woman who raised two hands said she’s been teaching for a long time, but she wants to change careers. Sheryl Sandberg said that when you sit across the table from a prospective employer, they are trying to decide if you can do the job. The only thing that will convince them is if you yourself are convinced. She said to believe in yourself, and she said she believed that women could do it.

One woman asked why more women don’t have mentors in the workplace. Sheryl Sandberg said one of the biggest reasons is that a lot of male managers become uncomfortable alone in a room with a woman and that’s exactly what they’d have to do if they were mentoring that woman. She also used the example that two men at a bar looks like mentoring, but a woman and a man at a bar looks like a date.

GMA: How To Be Taken Seriously At Meetings

What do you think? If you’re a woman, do you feel like you’re taken seriously in meetings? Why do you think there hasn’t been an increase in female leadership across corporate America in 10 years, despite women getting more college degrees for the past 30 years?