Dwayne Johnson came by Good Morning America March 27 2013 to talk about his new movie, G.I. Joe: Retaliation. Dwayne said it was exciting to be asked to play Roadblock. He said that he grew up an only child, so when he was a kid, he played with G.I. Joe and Star Wars action figures. He said that he was Snake Eyes and Boba Fett as a child. He said that it was a great experience to get the chance to lead the Joes. 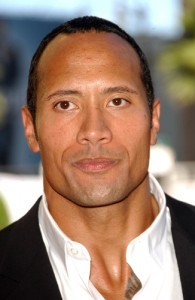 Dwayne Johnson said that Channing Tatum’s character Duke and his own character Roadblock are best friends and he said they really have great chemistry. He said the movie pays a lot of respect to the mythology of the show. He also said he was angry that Channing Tatum was voted the sexiest man alive, but that was obviously a joke.

Dwayne Johnson said that his diet is very clean when he’s training for a movie like G.I. Joe: Retaliation. That’s why when it’s time to cheat, he cheats big. He said he starts off with a dozen pancakes in the morning. Sam Champion said that carrying that many pancakes is a workout in itself. “For you, maybe,” Dwayne Johnson said, to a lot of laughter from people off screen. Sam Champion got up and walked away, before coming back and fist-pounding Dwayne Johnson.

Dwayne Johnson also likes to have four “double-dough” pizzas. The pizza place where he lives makes special pizzas that have twice the amount of dough as a regular pizza. Then, he eats double brownies made with peanut butter cookies inside of them. Dwayne Johnson cheats big when he cheats. Although I have to say, I want to try double-dough pizza and brownies with peanut butter cookies. Are those a thing in the world or did he make them up?  He should make a restaurant where everything on the menu is something you only eat when you’re cheating big on your diet.