For his entire career, Dustin Hoffman has been in front of the camera. Now at 75, Hoffman is finally directing his first film, Quartet. 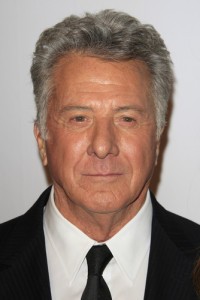 Quartet is the story of what happens when a group of opera singers and musicians retire. Dame Maggie Smith plays an ex-diva who runs out of money. She is forced to move into a grand retirement estate with many of her old colleagues.

Hoffman showed a clip of Smith’s performance, which looked hilarious. She walks into a room where the other seniors are dancing the cha-cha. All of the extras in the film are retired musicians and ex-opera singers. One of the men dances towards Smith and makes advances. She looks at him in horror and wonders how she got into this mad house.

Hoffman takes what could be a sad or boring story and injects humor to please his audience. He wanted to treat the story with respect. He said that performers have a short shelf life. Someday they will all phase out for the new, young crowd to emerge. He wanted to tell the story of what it’s like to be so high and fall so low.

Hoffman was recently honored at the Kennedy Center Honors, where he met the President and First Lady. He said that he tried to hold it together, but he did tear up.

When you receive a Kennedy Center Honor, you don’t get to pick who talks about you. Hoffman was surprised when his good friend Robert De Niro took the stage to talk about him as an actor. De Niro and Hoffman were filming one of the Fockers movies when De Niro told Hoffman about the first time he met him. Hoffman didn’t remember this, but De Niro had been a waiter in the 1960’s and waited on him. The first words Hoffman ever said to De Niro were, “How’s the flounder?”