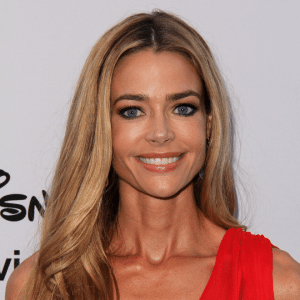 In Twisted, Denise Richards plays the mom of a 16-year-old that is just returning from five years in juvenile detention. While the entire community is scrutinizing her son, Richards’ character has to support him and keep their lives intact.

Richards said she loves the script and the characters are really amazing. In a clip, her son, played by VicTORIous’ Avan Jogia, is telling his mom that she brought him back to their family home for her own selfish reasons. Jogia gives a startling performance and Richards plays her part of the oblivious mom quite well.

For her role, Denise was able to pull from life a little bit. She has three girls, but taking on the role of mother to a troubled teen is much different. Her girls were thrilled when they heard she was playing Jogia’s mom because he’s pretty much a Nickelodeon heartthrob. Richards also pulled from being scrutinized. She’s had her life picked apart by the media on the regular.

In the lightning round, Lara Spencer learned that Denise Richards‘ first celebrity crush was John Travolta, he guilty pleasure is ice cream, her superpower would be to hear people’s thoughts, and her happy song is “Dancing Queen” by ABBA.

In over 20 years, The Goo Goo Dolls have sold over 2 million albums. John Rzeznik said he did a lot of the writing in a recording studio in Times Square for their new album, Magnetic, out June 11. The album comes out at a time when all of their lives are changing, Rzeznik is getting married, bassist Robby Takac just had a baby and drummer Mike Malinin is eligible for AARP in two years, they joked. Rzeznik said they are going on tour and will be at the Barnes & Noble on 154th Street in New York City later today.

The Goo Goo Dolls are always good. Rzeznik’s voice is magnificent and “Rebel Beat” is a really fun song. It’s a roll your windows down and cruise kind of beat. While I have a big love for the boys called Goo, I still hold it against them that my camera was confiscated at their concert three years ago. They’re just too strict with taking photos of their performances. They should chill out and listen to their lyrics.