GMA: Anne Hathaway Prada Dress Was Not Her First Choice

Good Morning America reported February 26 2013 that Anne Hathaway’s Prada dress that stunned everyone with its surprising open back was not her first choice for the red carpet. Reportedly, she switched out her Valentino dress because it looked too much like her Les Miserables costar Amanda Seyfried’s dress. Anne Hathaway is a huge Valentino fan, wearing the designer’s dresses at all the awards ceremonies and even to her wedding. With that in mind, along with the knowledge that Anne Hathaway once starred in a little movie called The Devil Wears Prada, the choice is all the more shocking. 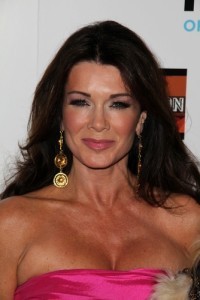 Lisa Vanderpump is one of the cast members for the new season of Dancing with the Stars. (s_bukley / Shutterstock.com)

Tom Bergeron and Brooke Burke came by GMA February 26 2013 to reveal the Dancing with the Stars cast for the new season. The new cast members are:

GMA: Dancing With the Stars Cast Gives Their Thoughts

Wynonna Judd said she joined the cast of Dancing with the Stars because she wanted to get down to her original weight of “eight pounds and 15 ounces.” The producers have asked her for six years to join and she denied them every time. She said she wanted to face her fears and that’s why she was on this year.

Kellie Pickler sported a new, short haircut, which Wynonna Judd explained was because her friend had cancer and Kellie Pickler shaved her head in support of her friend. Kellie Pickler also noted that she and Sam Champion had the same haircut. Kellie Pickler used to be a roller skating waitress and she said it gave her a big advantage, because she’s used to falling down.

When asked what he brought to the table, Victor Ortiz turned around and pointed to his partner, Lindsay Arnold and said, “Her.” That takes some serious faith in his partner, who is new to this competition, but finished in the top 10 of So You Think You Can Dance.